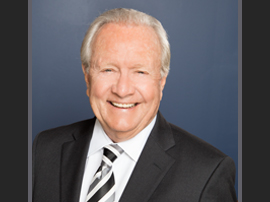 Curt Genders, the senior partner and founder of Genders-Alvarez-Diecidue, attended Sarasota High School and was accepted to Florida State University on a full athletic scholarship. While attending FSU, Mr. Genders was a three-time member of the All-America swimming team and a 1961 National Champion in diving. Mr. Genders was also named Scholar Athlete of the Year and subsequently elected to the FSU Athletic Hall of Fame. Mr. Genders received his undergraduate degree from FSU in 1961. Following completion of his military obligation as diving coach at the United States Military Academy at West Point, he attended Duke University where he received his Juris Doctorate in 1967.

Following law school, Mr. Genders moved to Tampa and accepted a position at the law firm of Fowler, White, Gillen, Humkey & Trenam, working as a defense attorney in the litigation department. In 1974, Mr. Genders accepted a position with the law firm of Wagner, Cunningham, Vaughan, which specialized in litigating plaintiff’s cases. During his tenure at Wagner, Cunningham, Vaughan, Hapner, May and Genders, Mr. Genders saw an area of the law that sparked his interest. In 1981, he established the law firm of Curt Genders, P.A. The focus of his practice was primarily in guardianship and probate law as it related to civil litigation. Mr. Genders has now retired and enjoys spending time gardening and playing golf. He and his wife have traveled extensively and enjoy spending time together with their five children and eight grandchildren.